Vitamin D, Autoimmunity and Your Thyroid 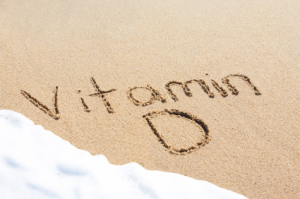 Most of us know at least a few things about vitamin D, called “the sunshine vitamin” because we can make it in our own bodies when our skin is exposed to sunlight. We might know, for instance, that vitamin D is important for healthy bones.  It helps our intestines absorb calcium, the main mineral in bones.

But did you know that vitamin D also plays an important role in cell differentiation and proliferation, and something called apoptosis?  That means it helps cells to behave properly and mature into their final form–and to self-destruct if they become abnormal. That’s important because cells that can’t control themselves are more likely to become cancerous. Vitamin D works exactly where it matters–in a cell’s nucleus. In fact, vitamin D deficiency has been associated with a number of types of cancer–colon and breast cancer, especially, but also thyroid cancer.

Vitamin D also plays a vital role in proper immune cell function. Immune cells–the cells that fight off infection–can be called upon to differentiate and divide rapidly. If they don’t do this right, it can set the stage for autoimmune problems. Your immune system starts to attack your own body, mistaking it for a foreign invader. Just about any part (or parts) can be attacked. Vitamin D deficiency has been observed in MS, lupus and rheumatoid arthritis. It also has a strong link with autoimmune thyroid disease (AITD.) The two most common types are Hashimoto’s and Graves disease.  Research has found that vitamin D deficiency is much more common in people with AITDs than people with non-AITD thyroid problems or people whose thyroid is healthy.

Furthermore, thyroid treatment isn’t optimal — and may not work — if you do not have adequate vitamin D for the crucial final metabolic step, which takes place at the site where thyroid hormone actually works. This happens inside the nucleus of the cell. Vitamin D needs to be present at sufficient levels in the cell in order for the thyroid hormone to actually affect that cell. That is why vitamin D is so crucial.

The big question: Can restoring vitamin D levels to normal slow the progression of an autoimmune disorder?  While that question hasn’t been answered fully and may depend on your stage, there is some evidence to suggest that it is worth a try. In an animal study, Chinese researchers found that vitamin D3, given before the establishment of autoimmune thyroid disease, helped maintain structural integrity of the thyroid gland and normal levels of the antibodies and cytokines in rats.  In a case report, Japanese researchers found that supplemental vitamin D stalled progression of cancer and improved thyroid function in a woman with cancer in her thyroid and surrounding tissues.  And researchers in Turkey found that the lowest blood levels of vitamin D correlated with the severity of symptoms in people with Hashimoto’s.  “These findings may suggest a potential role of 25OHD (vitamin D) in development of Hashimoto’s thyroiditis  and/or its progression to hypothyroidism,” they write.

Research is finding that lots more people than previously recognized are low in vitamin D, and that getting into a healthy middle range for blood levels can be helpful. Vitamin D is an important consideration for anyone dealing with hypothyroidism. The typical normal range for vitamin D levels is from around 30 to 100 ng/ml. But new research suggests that a level of about 35 ng/ml may be optimal for strong bones. And some people with autoimmune diseases may need higher levels than this.

Replenishing doses of Vitamin D for a period of months may be very helpful.  You can work with your doctor to determine the best dosage and blood level of vitamin D for you, especially if you have kidney disease or parathyroid problems. Vitamin D3 is the preferred form, as opposed to D2.

About the Author: Ginni