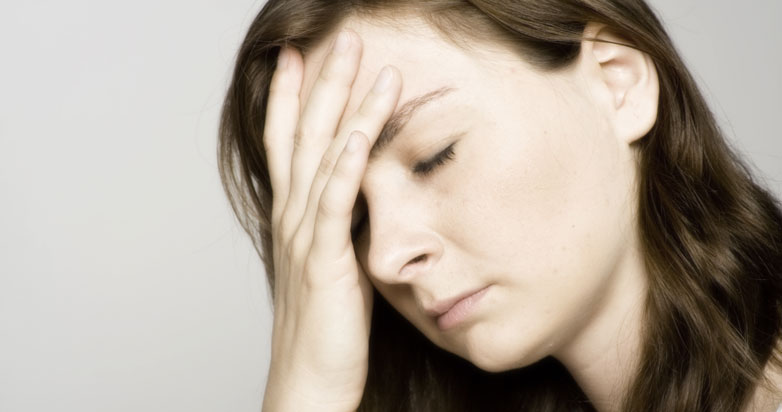 Can You See Yourself In One Of The Following Scenarios?

Many people with persistent health problems that respond well to Restorative Medicine have symptoms that:

Let’s begin to explore these scenarios by first defining health, in general, and then looking at health from a Restorative Medicine standpoint.

The Definition of Health

Health is defined as “an organism functioning optimally.”

An organism is defined as “a body made up of organs that work together to carry on the various processes of life.”

An organ is defined as “a part of an organism adapted for a specific function.”

The Body Can Usually Heal Itself Of Sickness And Injury, But Sometimes It Can’t

Under normal conditions, the body has an amazing capacity to repair itself, overcome illness, and return itself to good health. The body can usually repair cuts and bruises, broken bones, bacterial and viral infections, and even handle impressive amounts of stress and hardship.

On the other hand, some injuries and illnesses can leave the body with permanent damage such as blindness from an accident, partial paralysis due to polio, or even death. For example, AIDS can weaken the body’s ability to protect and repair itself to the point that it can finally be overcome by a type of infection healthy people normally wouldn’t even get.

Too Severe To Go Away On Their Own,
But Haven’t Yet Caused Permanent Damage

Between these two extremes are health problems that are too severe for the body to repair or overcome under the present conditions, but not so severe that they have caused permanent damage. In other words, the problems are reversible or curable and it’s still possible for the body to be restored to normal health.

If the body is not able to overcome certain health problems under the present circumstances, sometimes the body will be able to recover if the circumstances are changed. For example, many people are able to recover with improved diet, exercise, and rest. While others can remain sick even with plenty of exercise, rest, and dietary experimentation. It’s often hard to know what dietary substances the body might need, to help it recover.

To review, here is a range of severity for health problems ranging from least to greatest:

1st degree: can correct the problems on its own under the present circumstances.

2nd degree: can correct the problems on its own under improved circumstances (such as diet, exercise, and rest).

3rd degree: cannot correct the problems on its own, but they may be corrected with restorative medical treatment since there is little if any, permanent damage.

4th degree: cannot fully recover because there is permanent damage of part(s) of the body.

5th degree: cannot survive because of impairment of part(s) of the body resulting in death.

How The Organs Of The Body Are Supposed To Work Together

Organisms are essentially systems of organs that convert dietary substances and energy from food into function. 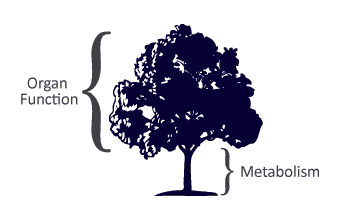 There are organs that

Thus, we have energy that is regulated to provide function. Many organs provide many specialized functions, but the parts of the body involved in the regulation of energy play a central role since energy is required for all other bodily functions.

The way the organs work together can be compared to a tree. A tree has a trunk, and it has branches. The parts of the body that regulate the energy or metabolism of the body can be thought of as the trunk of the tree. And the other parts and organs of the body that provide specialized functions can be thought of as the branches. Just as the trunk runs up the center of a tree and affects all the branches, so too does the metabolism affect all other bodily functions.

What Can Go Wrong?

Poor health must be due to the organs not all working together properly. Persistent health problems must be due to persistent derangements in the function of one or more parts of the body.

Referring to our tree analogy we can see that poor health must be due to persistent malfunctioning of the organ(s) [or branches], the metabolism [or trunk], or both.

One Problem Can Lead To Another 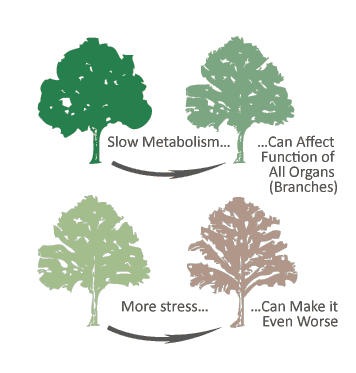 Under periods of stress (such as childbirth, divorce, or death of a loved one) the metabolism can slow down as a coping mechanism. That’s a normal response the body uses to conserve energy. After the stress has passed, the metabolism is supposed to return to normal but sometimes it doesn’t. The metabolism can remain persistently slow, as demonstrated by a low body temperature, even though the stress has passed. This condition is known as Wilson’s Temperature Syndrome because it causes low-thyroid-like symptoms and because it often responds characteristically well to a special thyroid medicine treatment, even though thyroid blood tests are often normal (You can use the links at the top left of this page to find out more about Wilsons Temperature Syndrome). When the metabolism slows down it can adversely affect all other bodily functions as in the illustrations below : 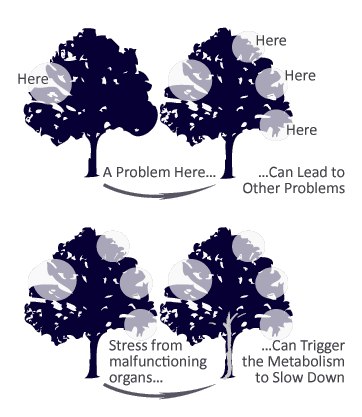 Health problems can also begin in the branches, or organs of the body and affect the function of other organs. Since good health depends on the organs of the body working together properly, it’s easy to see that a problem with one part of the body can easily cause strain on others. That strain can result in malfunction of those other parts as well. This can also sometimes start a downward spiral of poor health.

And just as diseased branches can eventually affect the health of a trunk, so too can malfunctioning organs eventually begin to strain and slow down the metabolism.

Which Scenario Do You Fit Into?

If you have symptoms, low body temperature and normal blood tests then it’s likely your metabolism is being affected by Wilson’s Syndrome.

If you have various symptoms but your temperature is normal then you might just have some impaired organ function.

Of course, you could have both.

One Improvement Can Lead To Another

The good news is that correcting a problem with one part of the body can relieve some of the strain on other parts. This can often lead to an upward spiral of restored health.

Here is more information about Wilson’s Temperature Syndrome and its effect on the metabolism.