A group of scientists inserted a thermometer sensor into the abdomen of a mouse and measured its body temperature continuously over a 24 hour period (dark line of readings in the diagram below). At the same time, they measured how much oxygen the mouse consumed out of the air (a difficult but direct measure of the metabolic rate)(red line of readings in the diagram below). 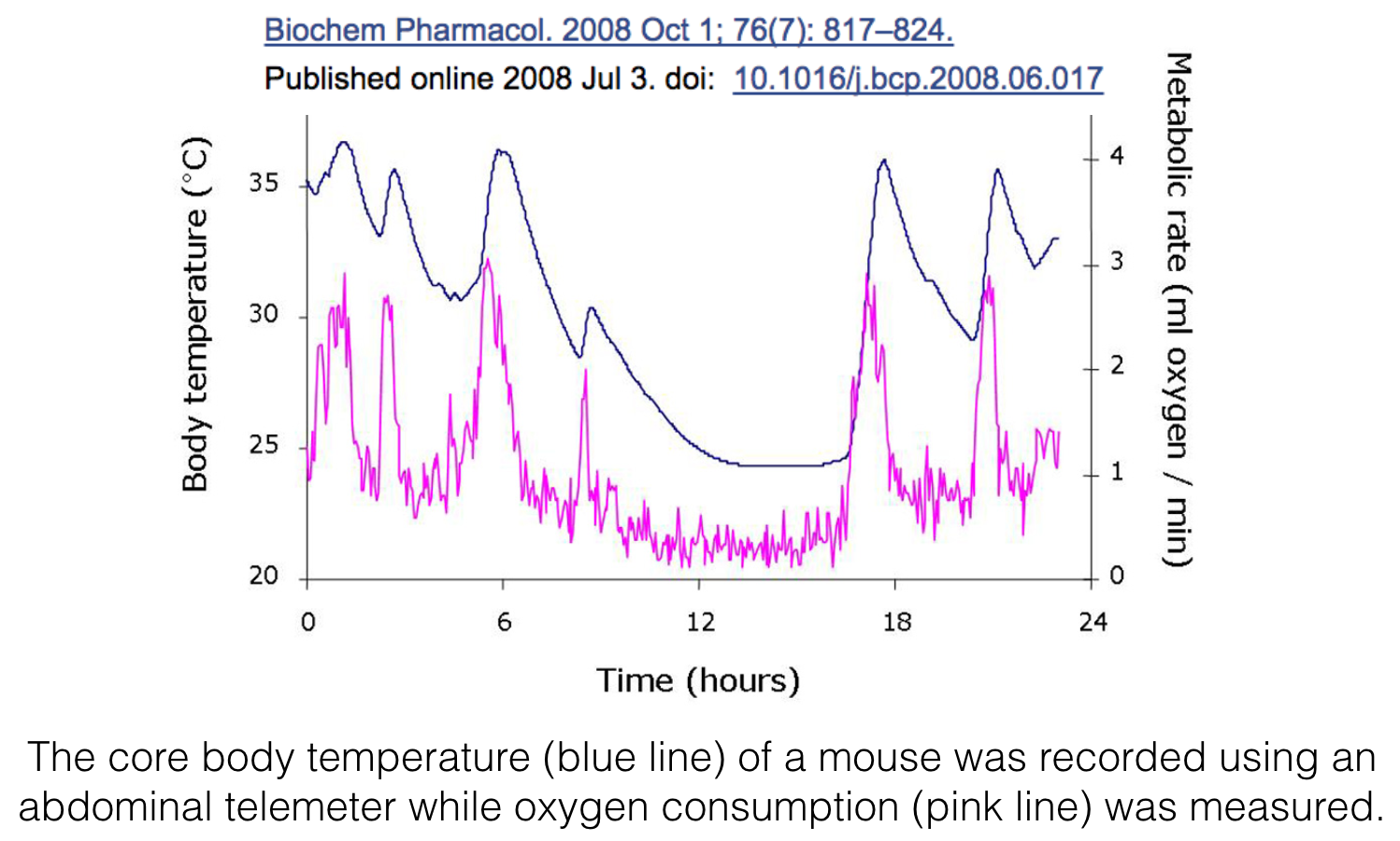 The body temperature does fluctuate some during the day. Body temperatures are normally lower in the morning, higher in the afternoon, and lower again in the evening. So if the temperatures are low during the day when they’re supposed to be at their highest, that’s better evidence that there’s a problem. In 2014 scientists published the following chart (Daniela Grimaldi, Federica Provini; Evidence of a diurnal thermogenic handicap in obesity; Chronobiology International, Early Online: 1–4, (2014)).

Another approach is for you to measure your body temperature

Here is a convenient temperature chart you can print out and use to record your temperatures.

For each day, add the 3 temperatures together and divide by 3 to get the average.

If your temperature consistently averages below 98.6 and you have symptoms of a slow metabolism then you may be suffering from Wilson’s Temperature Syndrome.

Moving the thermometer around in the mouth very much can increase blood flow to the area. That increased blood flow is coming from your heart which is one degree warmer and can increase the temperature reading. Therefore, try not to move the thermometer unnecessarily while taking your temperature. Thermometers normally get their readings within 2-5 minutes. However, the temperature can continue to rise when left in longer but that is probably due to the increased blood flow.

Some people have trouble “shaking down” a liquid metal and glass thermometer, in order to reset it for the next reading. One easy way to do this is with the thermometer in its case, slip it into a sock (with the end that goes in your mouth going in first toward the toe of the sock). Then, grab the sock by the ankle and spin it around like a propeller. This action will spin the metal down into the end of the thermometer, like a centrifuge.

Temperature patterns are also important and illuminating. How patients feel can be affected not only by how high or low their temperatures are but also on how steady their temps are. This is especially important during T3 therapy. One temperature reading a day is not enough to see how widely the temperature is fluctuating, but more than three a day can be too time-consuming.

What kind of thermometers should I get?

Digital thermometers are very fast and convenient but can easily become inaccurate from:

When they become inaccurate they can still give a reading, it just won’t be right. There’s no way of knowing whether the reading is correct or not. Sometimes, a digital thermometer will show one reading one minute and another the next.

Mercury Thermometers are no longer sold in the USA because of environmental concerns. One doctor believes that some mercury can make it through the glass of intact thermometers. She believes that some of her patients who are especially sensitive to mercury have noticed episodes of acute depression, headaches, and malaise just from measuring their temperatures with a mercury thermometer.

We recommend some great new liquid metal thermometers (not mercury). They contain a metal alloy called Galistan. We think they’re better than mercury thermometers ever were. For one thing, they provide accurate readings in only 2 minutes! This is especially true if the thermometer is 72 degrees or warmer before you measure your oral temperature.

If you have a different liquid metal thermometer, you can test it by keeping it in a quart of warm water and measure how long it takes for the temperature reading on the thermometer to stop changing.

No matter what thermometer you choose, no matter how new, it may still not be perfectly accurate. There is always some variation among thermometers, some small, some large. The important thing is for patients to be able to see the changes in their temperatures with proper T3 therapy. Therefore it would make sense for patients to try to take their temperatures, in the same way, each time with the same thermometer for comparison’s sake. The Galistan and Alcohol thermometers are especially good for this since they are so consistent. The liquids they contain are going to expand with warming the same way every time (make sure to shake down the Geratherm Galistan thermometers before each use to reset them). So even if a patient has a Geratherm Galistan or Alcohol thermometer that is a little inaccurate, at least it will be consistently inaccurate and in that way still useful (in showing the improvement in temperature with treatment).

These issues of thermometer accuracy don’t come up very often but they come up often enough that doctors and patients would be well served to know about them. For the most part, patients are easily able to see that their temperatures are low before treatment, that they come up with treatment, and that their complaints begin to disappear as their temperatures improve.

Your temperature’s low, now what?

You can order your own labs to see if your low temperature is due to Hypothyroidism/Hashimoto’s Thyroiditis or Wilson’s Temperature Syndrome. And you can find a provider that is trained in normalizing low body temperatures to help you recover. Physician training information HERE.