The shape of an enzyme also depends on its temperature. When enzymes get too warm, they get too loose. And when they get too cold, then they get too tight. When they are just the right temperature, then they are just the right shape and the chemical reactions that they catalyze take place at the optimal rate and with the most ease. When the temperature is too hot, too cold, or unsteady, the enzymes will spend less time in their optimal shape which simply translates into having a less than optimal metabolism.

An interesting example of how this works can be seen in the Siamese Cat. Its coloring depends upon the production of a certain pigment which is the result of a chemical reaction that depends upon a particular enzyme. Since the function of this enzyme depends on its temperature, the chemical reaction will only take place when the temperature is just right. Interestingly, the only places where the temperature is cool enough for the chemical reaction to take place are found in the cat’s extremities. These are the coldest parts of the cat and include the cat’s paws, tip of the tail, tips of the ears, and the nose and mouth area of the face. That’s why these parts are dark with the rest of the cat being light colored, and thus the characteristic markings of a Siamese Cat. It is said that one might adversely affect his investment in a show quality Siamese Cat by letting the cat be exposed to unusual temperatures. For example, if the cat is exposed to weather that is too cold, too much of the coat may turn dark.

So we can see that temperature plays a major role in the function of enzymes. For this reason, doctors have long been concerned about patients having very high fevers. If the temperature goes too high, the patient’s brain enzymes can denature (get malformed) which can cause delirium and can even be life-threatening. Doctors have also long been concerned with the opposite extreme when the body temperature is too low (hypothermia). This is equally dangerous and also can be life-threatening. It is difficult to understand why we have been very concerned about extremely high or extremely low temperatures, but frequently appear to not even consider the effects of milder aberrations in body temperature. If fever and hypothermia are two life-threatening extremes of a continuum, then it is only logical and reasonable that less severe alterations can cause less severe, but never-the-less significant problems. 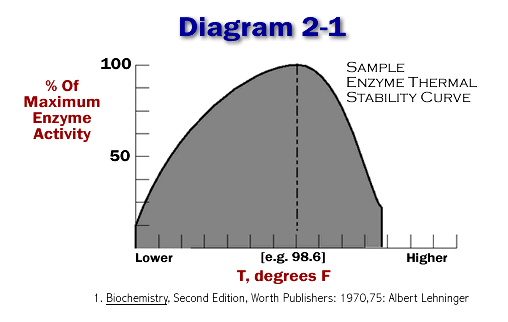 On the other hand, some factors differ very little from one person to another, such as the important enzymes for life. This is evidenced by the fact that some of the routine blood tests doctors do in an annual physical include tests for liver enzymes. These tests are specifically for enzymes that are normally found in every person’s body. The enzymes are extremely similar in structure and therefore, are similar with regard to optimal operating temperature. So, in a sense, an enzyme’s ideal temperature is dictated by the coding of that enzyme, which does not vary a great deal from person to person. And it just so happens that most of the important bodily enzymes function best at or near 98.6 degrees Fahrenheit.

It is hard for some people to imagine that most people operate optimally at a particular body temperature, often thinking to themselves, “everybody is different.” It is a little hard to grasp the wondrous design of it all. It’s helpful to remember that it is the nature of all things to move toward disorder. This tendency is called Entropy. That’s why objects tend to equalize in temperature.

An example of this would be, if you take a gallon of milk out of the refrigerator and put it on the counter top, you would not expect that three or four hours later it would be the same temperature as when it was removed from the refrigerator. It would be much closer to room temperature. Likewise, if a pot of boiling water is taken off the stove and placed on the counter top, it would cease to boil and in a short time would be close to room temperature.

Let’s suppose that the room temperature is 75 degrees. Given the Law of Entropy, one might expect that eventually your body temperature would also be 75 degrees. We know, of course, that this does not happen. Instead, you will most likely be very close to 98.6 degrees. That would be 23.6 degrees above room temperature! In fact, this characteristic is one of the things that distinguishes the living from the dead, hence the term “warm bodies” that is sometimes used to refer to living people. When we die, our bodies stop fighting Entropy and cool to room temperature. If there were no specific reason that people should be close to 98.6 degrees, you would expect to find some people running around 78 degrees, others 85 degrees and some perhaps 98 or 105 degrees. But we know that this is not the case, and so we have what is considered to be normal body temperature.

It is far from coincidental that people run about 23.6 degrees above room temperature, especially when you consider that all humans normally maintain a body temperature that is extremely close to 98.6 degrees within a plus or minus of 1.5 degrees. A variation as small as 1.4 degrees above normal (or 100 degrees), is considered adequate reason to be excused from work. Such a situation is about as coincidental as throwing a deck of cards in the air and having them land forming a card house.

We are all familiar with the symptoms that can be associated with fever, including headaches, achiness, fatigue and flu-like symptoms. These symptoms can be distinct symptoms brought on by an abnormally high body temperature in and of itself, and are not necessarily related to the underlying illness that brought on the high temperature. For example, a patient might have a sore throat generating a fever and fever symptoms. The patient’s fever symptoms can even be generated without underlying illness, such as the foggy mindedness that can sometimes be brought on by spending too much time in a steam bath or hot weather.

One way to understand this is to consider a radio. If you want to listen to a radio station with a frequency of 99.7, you carefully tune the radio to that frequency. If it is set a little too low, or too high, or the dial is loose (so that it drifts about easily), then part of the radio program might be received, but it might not be optimal because of static. If the radio is properly tuned, then the static disappears and the reception is clear. So too, if we are not at the optimal temperature, we may still be able to function at some level, but we won’t be at our best and may experience characteristic complaints and problems. Our performance will suffer when our temperatures are not tuned for optimal enzyme function.