Limitations Of Tests In General

Limitations Of Tests In General

It is interesting how much stock people are willing to place in blood tests and any other kind of test for that matter. It must be remembered that computers only do that which humans program them to do. Likewise, the significance of certain statistics depends on who’s interpreting them and the usefulness of tests also depends upon how they are being interpreted. It is interesting that we (possibly because of our perception of our medical technology) are easily convinced by the results of almost any scientific tests. Let me take a moment now to put tests into a little perspective. Contrary to popular thinking that tells us that blood tests, x-rays, or other kinds of tests are always conclusive, they are more frequently than not equivocal and non-conclusive.

Nevertheless, with our increased reliance on technology, frequently people are led to believe that these tests are extremely conclusive. Somehow this might be brought about by the notion that if a machine costs $600,000 or $700,000 and it can measure intricately the vacillations of the electron clouds of the tissues of the body or something equally amazing and mind boggling, then the results must necessarily be conclusive and useful in all situations, which is, of course, not always the case.

Normal Range
A few comments should be addressed to the “normal range,” since so many people are often dismissed as having no physical abnormality on the basis of their blood tests being within the “normal range.” When they do have a physical abnormality that doesn’t show up on a particular test looking for a particular problem then this is what is known as a false negative. It must be remembered that the “normal range” is an arbitrary setting of upper and lower limits in order to establish who does and who does not have a problem. As everyone well knows, what is normal for one person is not necessarily normal for another. Everyone is different. Some people are low, some people are a little higher, and some are higher still. If one plots the number of people having a certain value against the possible values that the tests can give, one finds that in almost any type of medical test, the distribution will follow what is known as a “Bell Curve”. It is called this because it is shaped like a bell. Most people will tend to have similar values (representing the middle of the distribution). With fewer people having extremely low or extremely high values, the curve takes on a bell shape. 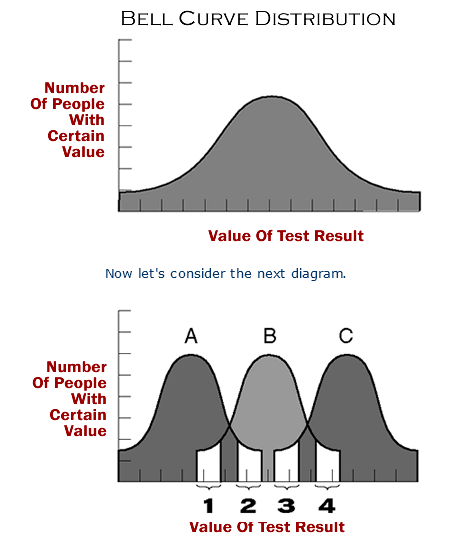 Without getting too deep into statistics, I would like to point out some common sense reasoning as it relates to “ranges of normal.”

The Bell Curve shape has a curved central portion with tails on either side. 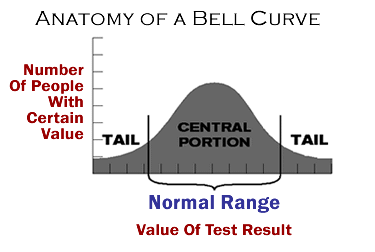 These bell curves can be of different shapes for different tests. Some may be broad and some may be narrow. Broad central portions indicate that the observations obtained have a greater degree of variation in different people, and narrow ranges of normal indicate that the test value of each person tends to be much more similar to the values of other people.

As we discussed earlier, entropy is the nature of all things to go toward disorder. If there is no influence causing things to be otherwise, things naturally tend to be random. Tests that have random results form a curve shaped like a rectangle as seen at the top of the following diagram. There is no influence that is causing any one particular value to be found any more commonly than any other possible value. This causes the curve to take on a flat shape. But as influences become stronger in affecting the outcome of a certain test, the shape of the curve becomes less like that of a random test and will take on more of a bell-shaped curve. 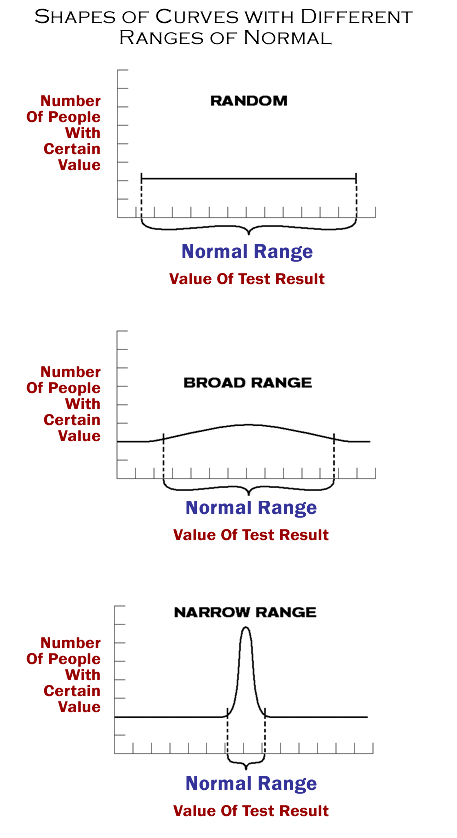 The stronger the influence, the stronger the shaping effect on the curve. It is the nature of tests to come out with a disordered, random, or flat-shaped curve. If some values occur much more commonly than others, it is not an accident. The stronger the tendency for obtaining a certain result over others, the stronger the likelihood that there must be a very strong influence. So in that sense, the flatter the curve, the more random its nature, and the less specifically the values of a particular test are being influenced. The more peaked the curve, the more likely it is that there is a very specific reason for the peaking, and the more meaningful the test may be (See above Diagram).

Limitations Of Thyroid Blood Tests
As it turns out, there is a very good reason that thyroid hormone blood tests are not always of great predictive value in the resolution of the symptoms of decreased thyroid system function.

At this time, in spite of our vast technology, there is no way to measure that action. Not for the past forty years, not now, and probably not for another twenty years, can that be measured directly. Historically, doctors have tried to estimate or predict that action based on what floats around in the bloodstream. But common sense tells us that, at best, these blood tests are just an indirect measure of what happens at the cells. And the symptoms of DTSF are caused specifically by low body temperature pattern abnormalities resulting from inadequate thyroid hormone stimulation of the thyroid hormone receptor sites.

Historically, thyroid blood tests have been used in order to try to estimate what will happen at the active site, but the body temperature can be used to get a better picture of what actually has happened at the active site. Thus, the monitoring of body temperature patterns is a more direct reflection of the adequacy of the thyroid hormone/thyroid hormone receptor interactions of the body.

These facts have led to a great deal of confusion and frustration. I feel that because the limitations of thyroid blood tests are not always borne in mind, false assumptions are made which is one of the biggest reasons that DTSF is so frequently overlooked.

Do Blood Tests Or Temperature Better Reflect Thyroid Stimulation Of The Cells?
It is well known that thyroid hormone levels and body temperature patterns are related. And, it’s known that if thyroid hormone levels in the blood drop to very low levels, then a patient’s body temperature can drop well below normal and the patient can even become comatose. It is also well known that patients who have thyroid blood tests that are exceedingly high can often have fevers well over 100 degrees in a condition that is sometimes called “thyroid storm.”

Which test, then, is best able to predict when a person is suffering from inadequate thyroid hormone stimulation, or when a person has excessive thyroid hormone stimulation at the site of the thyroid hormone receptors? To help us answer this question, let us consider the shapes of the curves of distribution of values of these tests when they are performed in a large number of people. To do this, let’s again remember the principle of entropy, the tendency of all things to go toward disorder. Let us remember, also, that the significance of any test values can be measured, to an extent, by considering how that value compares to what value one would expect in a random situation.

It is interesting to see that the TSH (thyroid stimulating hormone) test has the widest range of normal of the thyroid blood tests, suggesting that it may be designed, more than any other thyroid system hormone, to ensure a normal body temperature pattern. It is interesting, because TSH is the blood test currently regarded as the most sensitive reflection of thyroid gland function. But if TSH is regulated to fluctuate widely to help ensure a normal temperature pattern, then it is easy to see how the best indicator of the adequacy of the process is the end result, the body temperature, itself.

For example, the study habits of students who are trying to score well on a certain test may vary widely. A more confident student may decide not to study very hard, while one with less background might choose to be more diligent. One could try to measure the adequacy of their preparation for the test by how hard they studied, but a more accurate method would be by their actual scores.

Some people consider body temperature patterns to be a more vague and non-conclusive reflection of thyroid system function, because, “everyone’s different, and a lot of people have body temperatures that are lower than the average.” This is an unusual argument, considering that just as many people have thyroid blood studies that are lower than the average, and their values vary to a much greater degree than do their body temperature patterns. We must remember that the “ranges of normal” are arbitrarily set in an attempt to make the thyroid tests as useful as possible. Thyroid hormone blood tests are invaluable in helping to evaluate and regulate the thyroid system, especially the portion in which the function of the glands are important. However, the fact that there is only a 14% difference between the upper and lower limits of normal for body temperature readings indicates that the body temperature readings far better reflect the status of the thyroid hormone stimulation of the thyroid hormone receptors.

This leads me to believe that the thyroid hormone/ thyroid hormone receptor interactions are regulated in such a way as to provide such specific and consistent body temperature patterns for an extremely important purpose. And I believe that extremely significant purpose is to help provide the optimal conditions for the enzymatically-catalyzed reactions of the body, thereby affecting virtually every bodily function. Thus, the reason for the maintaining of extremely specific and consistent body temperature patterns is that essentially all the bodily functions depend upon it. Since thyroid blood tests fluctuate widely, it is easy to see why temperatures end up having much greater predictive value, in relation to the symptoms of DTSF, than thyroid hormone blood tests. Just because a test is more expensive or difficult to perform does not necessarily mean it is better or more useful.